A year ago I wrote a story about my favourite Colorado hometown café. It was titles  A Mountain Gem for 70 Years.  The owner, Rocky St. John, passed away right before Christmas. In tribute to her, I have revised my words and added additional photos. Her sons Ben and Joe, along with their father, are keeping the café open in her memory. She trained them well. 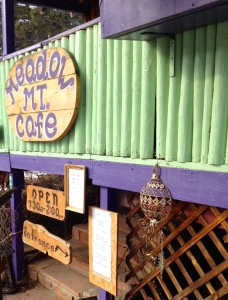 Allenspark, Colorado lies in a curvy bend off Highway 7, between Estes Park and the valley below. As you drive past the majestic scenery of Wild Basin and the backside of Long’s Peak, it’s easy to simply bypass this tiny town. But if you turn right onto the business spur, it’s probably because you know about Rocky’s Meadow Mountain Cafe.

On a hillside halfway through town is a small green building with purple trim. Colorful buttons are mixed into the cement between slate stone steps climbing to the front porch. The main room has knotty pine walls and an antique potbelly stove, radiating warmth. Shelves are lined with an eccentric collection of salt-and-pepper shakers. Local artwork is for sale on the wall. Behind this quaint façade is a long history of food, friendly service, and loyal customer relationships.

It began in 1946 with a local character named Lil Lavicka. Known as the “Pie Lady”, Lil was famous for her homemade baked goods. As part of a divorce settlement, her husband hastily built a two-room cafe across from her tiny home. Lil’s Pie House flourished for twenty summer seasons.

Then, after several changes of ownership, Meadow Mountain Cafe was born. Breakfast and lunch became the daily fare. Food was fresh and home-cooked to order. Coffee was hot–with a touch of cinnamon. Consistently good food, friendly service, and reasonable pricing enhanced its’ reputation beyond the boundaries of the small community. Locals and tourists line up for a table inside or on the covered porch, complete with hummingbirds, flowers and an overhanging pine tree. Lil Lavicka’s seasonal pie house evolved into a legendary year-round cafe with returning customers who became friends. 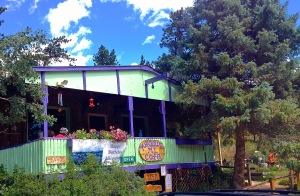 Roxanne [Rocky] St. John began waiting tables at Meadow Mountain more than 30 years ago. It wasn’t long before her cooking finesse and creativity nudged her into the kitchen full time. Rocky worked the grill for several female owners until finally, in 2007, she took over solo ownership. Already an established part of the ongoing success of Meadow Mountain, it was time to put her personal stamp on the place.

Rocky introduced two new house specialties–the veggie burger and the green chili sauce for huevos rancheros. Cinnamon spiked coffee is still standard, of course. She chose the outside paint colors and easy-on-the-eye peach walls for the kitchen. The button-inlaid steps were designed and built for safer access in all weather conditions. An herb garden was planted out in back. Inside, the eclectic collection of coffee mugs and salt-and-pepper shakers [always part of her style] continued to grow. Her kitchen blasting music-of-choice ran along the lines of Bob Dylan and Johnny Cash.

We have been driving from our cabin in Estes Park to Meadow Mountain Cafe for more than 15 years. It never disappoints. It’s not meant to be fast food. You wait patiently and sip good coffee, talk leisurely. Perhaps you warm your back near the antique stove, muse over the salt-and-pepper collection, read a book or eavesdrop quietly on another conversation. You watch regulars walk into the kitchen to say hello. At a corner table, friends sit and play cards after their meal. A man at the counter leans his chin into one hand and dozes, holding a coffee cup with the other.

Orders parade out of the kitchen. Coffee mugs are refilled. Homemade brown bread, thickly sliced for toast or sandwiches, is baked twice daily in summer to keep up with demand. The scene is homey and multi-dimensional–from the diversity of customers stepping through the door to the din of country or rock-n-roll music pouring out of the kitchen. Conversation and laughter is spiced with the clatter of plates and silverware as tables empty and fill. 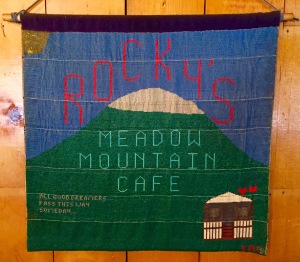 beaded tapestry made by a friend of Rocky’s

What sustains this kind of success in a town of just over 500 people? Rocky, along with the women before her, crafted a timeless formula. It begins with an old-fashioned hard work ethic. It’s maintained by keeping quality high, service friendly, and community relationships strong. Rocky was passionate about what she did and consistently did it very well. And then, just maybe, that hint of cinnamon in the coffee didn’t hurt either.

new step up to the cafe

Rocky was a well-known and well-loved figure in the Estes Valley community. Meadow Mountain will continue to flourish in her memory. After a 70-year legacy of female owners [since 1946], the cafe will now operate under the expertise of Dan, Ben, and Joe St. John. In Ben’s words, “We have been well-trained.” Indeed.

And the rest of us will continue to be there to support them.