The last time I turned down a whisky, I didn’t understand the question. –Anonymous

I always take whisky as a night preventative of toothache. I have never had a toothache. What is more, I never intend to have one. –Mark Twain

I love so many things about Scotland–except perhaps the native food culture that takes mashed up sheep innards, encases them in stomach lining and disguises the whole mess by calling it “haggis”. Scottish comfort food for some, an acquired taste for others. or neither option for me. On the other hand, a morning bowl of hot porridge with butter and honey stirred in, topped with fruit and a wee drizzle of whisky–well, I took to that right away.*

Our New Year’s holiday was spent in the countryside of the central Scottish Highlands, south of Inverness. We stayed in a stone cottage on the grounds of a 17th century farm in Cairngorms National Park. It was nicely decorated, outfitted with a wood-burning stove that kept the living room toasty warm. Otherwise, we wore layers. 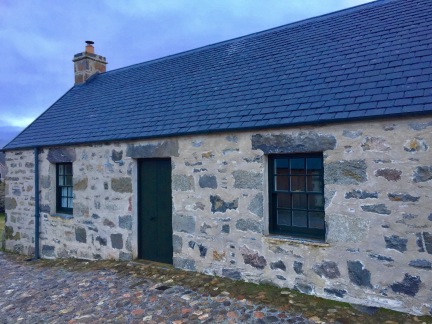 The Bothy, our cottage 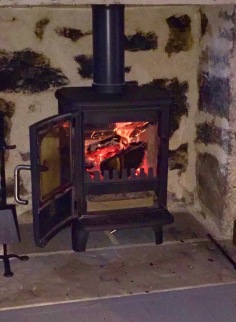 the source of heat

Killiehuntly office and storage buildings
This excursion was inspired by the Outlander series of books by Diana Gabaldon. Each is a captivating tome of historical fiction set in 1700s Scotland, England, France, and the young U.S. colonies. There is also some time travel. Certain characters have an ability to pass through a cleft in a ringed cairn of standing stones in the Highlands and fall into a different century. Don’t let that put you off–somehow it all works. Gabaldon weaves an engrossing tale with strong male and female protagonists that pull you right along.

The other reason we headed from Paris into the winter Highland hills is that I enjoy single malt whisky. My husband does not, but he does enjoy driving on the opposite side of the road. Match, game, win-win!

I don’t simply like to taste or sip whisky. I need to understand it. “Distilled” into bullet points, this is what I know about the drink of my ancestors.

It is crucial that a river runs through it…

Water is also important when enjoying whisky as a beverage. You can drink it straight, unmixed, or un-chilled. Or, water can be added to bring out flavor.

Ernest Hemingway contributed to the misconception about water when he proclaimed, “Real men drink whisky straight.” An unnamed source “straightens out” Hemingway’s assertion. “There are two things everyone should know about Hemingway. First, the whisky he drank had already been diluted by the distillers before he got it; secondly, that man was an awful fool.”

If water is added to whisky, it should be “as soft and pure as you can find”–ideally, natural spring water. To enhance subtleties in flavor add an equal amount of water, depending on the whisky and its’ strength. Tap water also works fine. **

When in Scotland never request “a Scotch”. Total tourist talk. Ask for “malt whisky” or request by distillery name to guarantee being served native spirit.

Measurement size is ultimately determined by the generosity of the pourer. In most Scottish bars, one dram is usual, but not always…a bartender in Edinburgh overflowed the measuring cup directly into my glass upon hearing the sorry tale of my cell phone’s demise moments before when it smashed to smithereens on rain slicked cobblestones. 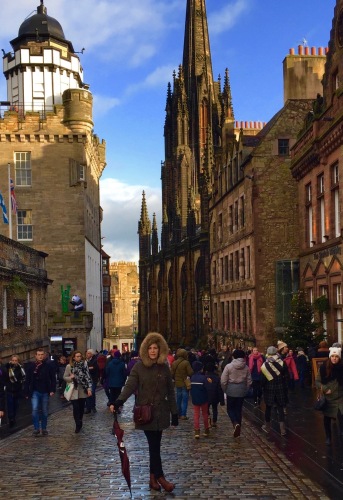 after the rain in edinburgh 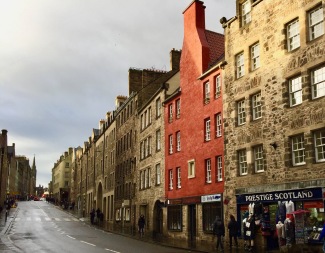 the royal mile, edinburgh, scotland
With designated driver behind the wheel, I sampled whisky from two distilleries, Tomatin [Speyside] and Dalwhinnie [Highland], because they happened to be close to our farm cottage and the winter roads were icy.

Dalwhinnie Distillery was particularly popular on New Years’ Eve as it was open all day. Their sampler of six whiskies was served with individual chocolate palate cleansers on the side. I wanted to purchase something that was not exported or distributed in mainstream stores. Dalwhinnie Distillery Limited Edition is sold only on site–6000 bottles produced, 900 left.

A serendipitous coup occurred in the town of Aviemore. I walked into a shop and asked the man behind the counter where to find a liquor store. He scratched his head and said, “What? You must be American. No one says that here. We call them booze stores.”

Ben Harris is the proprietor of Cairngorms Creations, a shop of colorful knickknacks. I told him I was interested in whisky found only in Scotland to take home with me. He said, “Do you know the black whisky, Beinn Dubh? It’s made just a few miles down the road.” I had never heard of black whisky. Speyside Distillery which produces it is not open to the public. 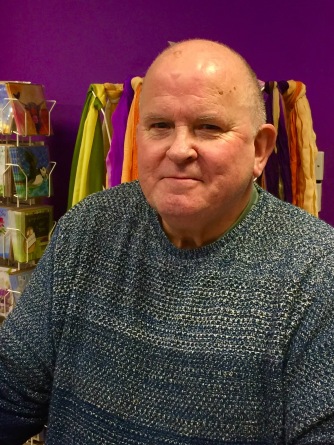 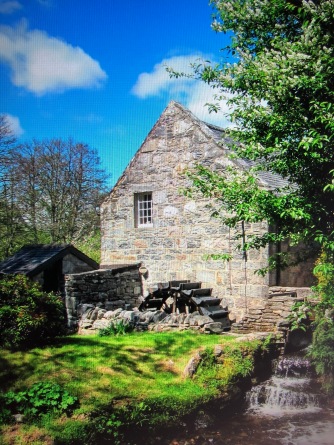 Speyside Distillery–known as the prettiest in Scotland
December 31, late afternoon. We followed Ben’s hand drawn, not very accurate map, got lost, backtracked, and finally found a store with the right address but selling home furnishings. The glass doors were locked–early closure for the holiday. Seeing people inside I knocked loudly, pressed my map to the glass and shouted, “We were sent here to buy black whisky!”

They let us in. The man behind that counter was drinking a glass of Beinn Dubh before he went home. He offered me a taste. The dark-as-night color is specific to its’ maturation in Portuguese ruby port casks. [I later learned that added coloring helps too.] I bought a bottle for my son and one for myself.

Killiehuntly Farmhouse and Cottage now has a Danish owner. He and his extended family were using the main farmhouse, up the hill from our cottage, for the holiday. While they ate dinner inside, we sat by a bonfire outside, drinking champagne under fog-rimmed moonlight and tossing large logs into the pit to keep warm. It was exactly where we wanted to be.

The owner came outside wearing a tuxedo and, after chatting for several minutes [ascertaining our politics–yes indeed!], invited us in to see the restored 400 year-old farmhouse, meet his family, and share a dram of…black whisky. The very same we had chanced upon that afternoon.

In the living room a fire burned brightly. The Christmas tree was adorned in Scandinavian straw ornaments. Conversation flowed easily between Danish and American cultures and across three generations from children to grandparents.

The whisky was very smooth, very black, and served neat. My husband politely, tentatively, sipped his first-dram-ever. He looked up from his glass to me across the room…and smiled.

It was a “verra” good holiday.

* Whisky in the morning oatmeal was not on the menu during our Scotland trip. The idea came from Gabaldon’s books. She describes steaming bowls of porridge served with butter and honey melting in. If whisky was available to the Scottish character, Jamie Fraser, he would drizzle it onto his porridge. Now, in the wintertime, I make it that way at home. Sublime! [Note to self: hack this recipe for future story.]

** I’m neither a water purist nor a Hemingway abstainer from water. I have my own method for the perfect water to whisky ratio. Running a very thin stream of cold water from the tap, I pass my glass under it three times. Just right.