In June 2015, our son Adam married his bride, Anna Jerovejeva, next to a lake in the Latvian countryside. The partying went on for two days and was told in a previous story, Letting Go In Latvia.

The women in our daughter-in-law’s Russian family–mother, aunt, grandmother–invited me to return to Riga, Latvia for mushroom hunting season in September. Foraging the forest for edible fungi is an anticipated annual event.

The lack of language on both sides [no Russian-me; basically no English-them] was slightly daunting. Then I realized it would be crazy to pass up an adventure like this. Think of the advantages. 1. I would forge a new Russian/American alliance. 2. I would participate in an ancient survival skill involving tools and hunting. And 3. I would learn to avoid poisonous fungi that could upset international family relations.

Arriving in Riga, I was hosted to a private tour of the old city and its history. My guide, a young Latvian woman, spoke fluent English. Anna’s mother, Tania, who speaks a little English but not confidently, acted as my personal photographer. 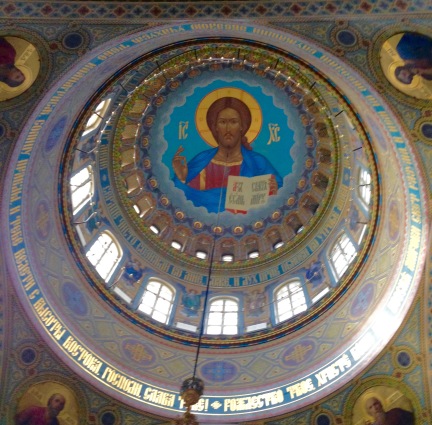 ceiling in the orthodox church

tania and wendy and a monument

Like many Eastern European countries, Latvia has a complicated history. In the beginning it was purely Pagan. Then Germanic people arrived bringing Christianity to the old world mix. They set up shops and churches and a new form of civilization. There were influxes of settlements of Poles, Finns, and Russians.

After WWI, from 1918-1940, Latvia had a brief twenty-two year period of complete independence. The Russians returned in 1940. Then the Germans replaced the Russians until WWII ended. In 1945, the Russians ran the Germans out for the last time. The Soviet Period lasted until 1991. Finally, Latvia underwent its second independence with the breakup of the USSR. The post-Soviet years began.

In 1991, a new law stated that in order for citizens of Russian heritage to receive Latvian passports they must learn both the language and history of the country. Many chose not to as they were past school age, raising families or trying to get by working their everyday jobs. Anna’s maternal grandmother, Vera Gorbacova, is one example. She was born on the eastern edge of Latvia near the current border with Russia. She raised two daughters, Tania and Olga, and worked in a factory as an engineer. She never learned to speak Latvian. The family mother tongue is purely Russian.

Mushroom hunters in Latvia are a devoted cult. The day of the hunt has its own rituals. As foragers, the women have favorite forest areas where they return many times each season. Mushrooms are best harvested in cool, rainy weather where fungi grow plentifully in mossy groundcover under trees, rocks, and leaves.

Early fall of 2015 was unseasonably warm and sunny . I didn’t need to dress traditionally in rubber boots or even wear a coat. We left Riga mid-morning and drove 45 minutes outside the city to the secret woods. My guides were Tania, her sister Olga, and their friend Edita, who acted as my translator. That day they needed to do some serious sleuthing to find the coveted treasure.

I was given my own set of tools–a basket holding a knife for harvesting and a purple plum for energy. I was shown how to cut mushrooms close to the ground with the special blade. Off we went, fanning out to cover maximum territory.

The woods were not particularly dense, but if I wandered out of visual range I would hear a plaintive “Wennndeeeeey, where are you?” These women were not about to lose their American relative in the Latvian forest. I tried to stay within their range of comfort.

Olga is particularly gifted in guiding the hunt. She would search an area alone and then call me over to do the actual picking. Or cutting. But I really liked finding some little nest of mushrooms on my own. However, when I showed them off proudly, Olga threw most of them back on the ground because they were too small. Or they were­, well…poisonous. 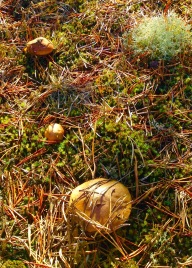 baskets set aside for lunch

One of the great parts of the day was when we returned to the car for lunch. A tailgating party! From the open trunk came a delicious little feast you could hold in one hand. No plates or napkins necessary. Silvery smoked fish covered small squares of sliced black bread. There was a whole hardboiled egg, and a big wedge of red tomato.  Lunch looked like a beautiful still life painting–in my hand.

Two more hours of hunting before returning to the city, changing clothes, and meeting at Tania’s to cook dinner. My translator from that point on was the vivacious Julia, married to the very patient Juris who would not take a drink of alcohol during our time together because he was responsible for safely chauffeuring “precious cargo”–Julia and me. You have to love a man like that!

Tania was cleaning mushrooms when we arrived. Her technique was meticulous. They must be completely peeled–head to stem. [Thus, bigger means less work for the end result.] If the inside of the stem was not perfectly white, when looking at it from the bottom, it meant worms had invaded. These were immediately discarded as unacceptable. After peeling, mushrooms were rinsed and drained in a colander.

While the cleaning is tedious, the cooking is easy. Slice and chop stems and heads into random sized pieces. Sauté diced onion in olive oil. Add mushrooms and cook on medium-high heat. Keep the water that is released and stir it around to steam them.

Then, drain the water. Add some butter. Add two big spoonfuls of solid cream [like crème fraîche]. Add salt. Serve immediately. I would add a generous grind of fresh pepper or even some red pepper flakes. But this is not the Russian way.

While Tania was preparing our meal of roast duck, fried potatoes, sautéed mushrooms, and sliced tomatoes, Julia was introducing me to the finer points of drinking vodka Russian style. It should be consumed in shots with traditional food pairings.

First the vodka is frozen. Pour into a shot glass. Drink the shot. Immediately eat a tiny piece of black bread covered by oily fish, onion, and tomato. Or, down a shot followed by a pinch of warm fried potatoes and some pickled cabbage. Either way–deliciously satisfying. No side effects. 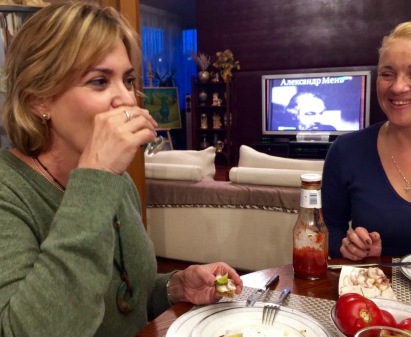 vodka with bread and fish or

with a pinch of cabbage

A cultural turning point occurred at evening’s end. For dessert we had eaten sweet watermelon chunks with our fingers. This reminded me of a story daughter-in-law Anna had told me from her childhood. So I shared it with the others.

When her parents, Tania and Sergei, would go out on summer evenings leaving her at home, Anna would slip out of the apartment and go to the market with saved coins. She would pick out a big ripe watermelon and lug it home. Managing to cut it in two pieces, she ate one whole half by herself with a spoon down to the white rind. Seeds and all!

As I finished telling the story, everyone glanced down at the dessert plates. On every plate there were two or three watermelon seeds idly dropped. But on my plate there was a mountain of black and white seeds because I had carefully picked them out before eating the sweet fruit. Every single seed.

I quietly covered my plate with a napkin. But it was too late. The women watched and erupted into uproarious, mirthful laughter. So did I.

As it turned out, Glasnost prevails. Around this cross cultural table of Anglo/Russian women we laughed long and hard. And saw each other clearly.

18 thoughts on “Shrooming in Latvia”