For three years, in the early 1990s, we lived on the island of Cyprus in the eastern Mediterranean Sea. The capital, Nicosia, was divided in half by the Turkish invasion of 1974. After the conflict, U.N. troops kept peace along a border called The Green Line. This line divided the entire island between the Turkish occupied northern section and the Greek populated land to the south. We lived on the Greek Cypriot side of Nicosia. Although you could still see bullet holes in certain places, the old part of the city was very charming—vine covered walls, stone terraced tavernas, shops of pottery, pewter, and hand made lace, narrow cobbled lanes with flowers spilling out of pots.

We lived on the ground floor of a small apartment building adjacent to the International School of Cyprus [ISC], as it was called in those years. The kitchen and living room had glass doors that opened onto a large terrazzo-tiled terrace bordered by a white railing. It was overhung with willow branches from an enormous tree growing out of the garden of the Greek restaurant on the hillside just below. In warm weather, sounds of clinking glassware and cutlery drifted upward as tables were set for dinner on the outdoor patio. We befriended the owner, and sometimes he would invite us to join him for a late night glass of wine. After the last diners departed, we tiptoed down the stone stairs between our terrace and his restaurant to share a drink under lanterns hanging from the willow tree.

I met Janmarie during the first year because her four children attended ISC. After dropping them off in the mornings, she was at my kitchen table by 8:30AM for coffee. Every day. We became good friends over those visits, talking easily  about many things. She was also my cooking mentor, and I learned to prepare a few Lebanese specialties that became supper-time staples. Those are stories for another time. Once in a while, morning conversations segued into lunchtime hungers. When this happened, particularly in the wintertime, Janmarie would say, “Let’s go for some Halloumi.” We headed downtown to the old part of the city.

Halloumi is a cheese that originated in Cyprus centuries ago. Traditionally it came from sheep’s milk, is pure white, shaped in semi-solid blocks and packed in salty brine. Once relieved of it’s packaging and drained, it looks rather ghostly, anemic, and unappetizing.  The power of this cheese is that it is transformed into something exquisitely different by adding heat and grilling it to a golden color. At that moment you should eat it right away, if possible. It’s also delicious at room temperature, but the texture becomes chewier and sort of squeaks in your mouth. 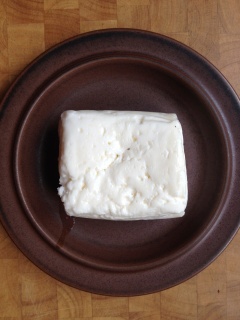 On the streets of old-town, hot off the griddle, layered on a kind of panini bread with tomato and cucumber slices, then grilled again in a sandwich press, halloumi was more than a hand held snack. It was the taste of salt from the ancient sea mixed with creamy chewiness and warmth, in direct contrast to the coldish air in which we sat. On a wintery day in a Cypriot taverna, the smell and taste of that sandwich was reminiscent of the cobblestoned history under our feet. It symbolized, for me, 9000 years of island invasions and conquerors, Greek mythology, Roman ruins, archeological digs, picnics in poppy fields, smooth-stoned beaches, and red-tile roofed stone houses overlooking the sea. I never forgot that feeling created by time and place, nourishing food, and my friend.

When we lived there, you could not buy halloumi anywhere else in the world. It was strictly a local product–made and consumed in Cyprus. We moved on to live in Taiwan, and, later, Germany and France. Halloumi was relegated to a memory of a life that we left. Then one day, in a Greek delicatessen on our Parisian market street, I spied bricks of that briny cheese for sale. The global marketplace had caught up. Taste and memory were about to be rekindled 20 years later.

There are different ways to prepare and enjoy halloumi. The easiest way is to slice it about ¼ inch thick and fry in a little bit of good olive oil. When nicely browned on both sides, it is the start of a great sandwich using pita bread or a tortilla wrap. Layer in tomatoes, cucumbers, red onions, spinach or whatever you have on hand.

It’s also good for breakfast, on hot toast, with or without eggs on the side. As a snack or hors d’oeuvre, halloumi can be prepared a little differently. Cut into cubes and brown on all sides in a small amount of good oil. When golden, place in a bowl, drizzle with a bit more olive oil and sprinkle with red pepper flakes. Pass out the toothpicks and eat it right away, with olives, fresh veggies, or simply enjoy the warm salty creaminess on its own.

Although the world is now an international marketplace and I can eat halloumi whenever I choose, in my own sensory landscape what I cherish most is these three together: an ancient Mediterranean island, the laughter and camaraderie of a great friend, and a hot halloumi sandwich on a cold day. 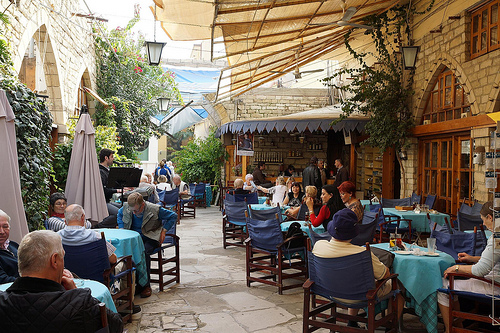