It has been several months between writing stories while we packed up our life after 31 years overseas and repatriated home. Now there are new jobs to learn and new geographies to explore on the east coast of the U.S. And while there are other overseas adventures to share, this is my farewell to eight years in Paris. 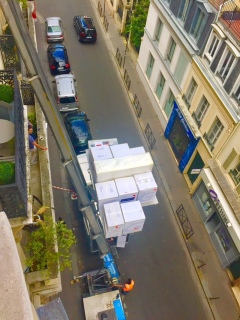 boxes exit out the window

If ever a city were designed to distract us from our troubles, it would be Paris.–Thomas Jefferson

If you are lucky enough to have lived in Paris…then wherever you go for the rest of your life, it stays with you, for Paris is a moveable feast. –Ernest Hemingway

When I read The Old Man and the Sea as a student, I found it dry as dust. Decades later, after devouring A Moveable Feast, Hemingway’s memoir to first wife Hadley set in 1920s Paris, our lives intersected more personally. Because I was living there.

My “earnest” infatuation with all things Hemingway began in 2010. It was more than literary interest. I walked up and down streets of the 5thand 6thArrondissements (neighborhoods) seeking addresses transcribed into my pocket-sized black moleskin notebook. I found the location of every apartment, restaurant, bar, and café where Hemingway was known to have lived, eaten, slept, talked, consumed alcohol, or written. More than 90 years later, in cafés where he nursed a single café crème for hours to keep his table and construct that “one perfect sentence”, I sat and read his books.

The first apartment where he and Hadley lived until the birth of their son, Jack, is marked with a plaque outside the entry door on rue du Cardinal Lemoine. The studio apartment he used for writing was around the corner from Place de la Contrascarpe on rue Descartes. He carried bundles of sticks up six flights of stairs to burn in the fireplace for winter heat. 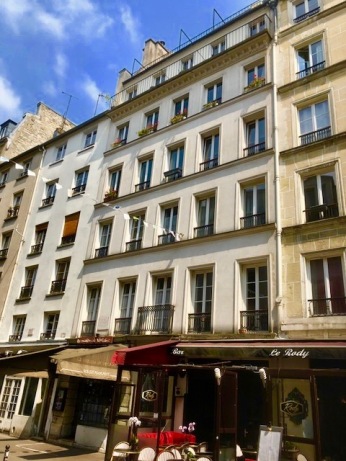 top floor studio was where he wrote

Hemingway crossed through the Luxembourg Gardens, often passing by La Fontaine de Médicis, on his way to meet Gertrude Stein at her apartment on rue de Fleurus for conversation and counsel before the unfortunate rupture of their friendship.

He borrowed books and talked with other struggling writers at the Shakespeare and Company bookstore owned by Sylvia Beach on 12, rue de l’Odeon. Sylvia lent him money, when he was hungry, along with the books. Today, the original Shakespeare is a clothing boutique.

After WWII, Shakespeare and Co. re-opened across the river from Notre Dame. The owner, George Whitman, eventually passed it on to his daughter, Sylvia, named after Sylvia Beach. Under Sylvia Whitman, Shakespeare now encompasses two storefronts plus a café.

When Hemingway began an affair with Hadley’s girlfriend, Pauline Pfeiffer, the marriage sadly ended. After marrying Pauline, they lived on rue Férou near Saint Sulpice church. In this apartment he wrote A Farewell to Arms.

I read stories of the bar at the Ritz Hotel where Hemingway, F. Scott Fitzgerald and others convened for hours on end. Since Hemingway was a regular there for 30 years, and the bar was eventually named after him, it was on my list to know.

Actual discovery did not begin until our last year in Paris due to an extensive four-year renovation of the entire Ritz infrastructure. Toward the end, a roof fire created even more delays before the reopening.

Bar Hemingway, a very small space in the Ritz footprint, has it’s own unique history. In the early 1920s, it began as a ladies bar or “steam room”, followed by a poets’ bar, and then a writers’ bar called Bertin’s. Bertin was a friend of Hemingway’s who gave him gambling tips. And more than a few free drinks. Ernest was a man who often counted on the generosity of others.

In 1979, Mohamed Al-Fayed (owner of Harrods, London) bought the Paris Ritz. That same year, Hemingway’s family officially named the “Hemingway Bar”. Three years later it closed for the next twelve years, 1982-1994. Two years after reopening, in 1996, the name was copyrighted as “Bar Hemingway Ritz Paris.”

Located on the very backside of the hotel, it is most easily accessed from a small side street. But I like to enter via Place Vendôme, through the front door of the Ritz, where there are uniformed doormen. Walking down expansive high ceilinged hallways past splendidly decorated rooms where tea or drinks or food is served, I peek into display windows of the high-end shopping gallery. Turn another two corners, go down several steps and walk in the door of a cozy, wood-paneled room.

Minimal changes were made here during the renovation. Woodwork was stripped and refinished and new lamps were added over the bar. The Hemingway paraphernalia is all there–books, magazine portraits, photographs with wives, friends, and dead animals, a black Corona typewriter like the one he used, a long barreled hunting rifle behind the copper bar, fishing rods, a boat propeller, and a bronze bust of his head.

Sometimes I would go with a girlfriend or two when it opened at 6 PM, other times with my husband on a weekend. But if I wanted to ask questions and learn more, I went by myself–sliding onto a barstool to talk with head barman, Colin Field.

What is it that draws crowds of people every day to this little piece of real estate tucked into the backend of a high-class hotel? Is it romanticized lore of Hemingway’s life in Paris–from marriages to Hadley and Pauline in the 1920s, to working as a WWII correspondent in the ‘40s, a short-lived third marriage, spiced with competitive friendships and raucous fights with other painters and writers of the time? Or is it because of the drinks, many of which are original and creative but, at the same time, over-the-top expensive? 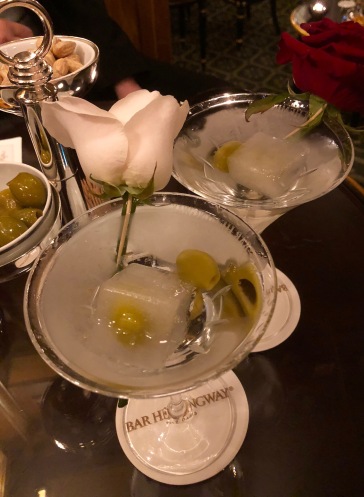 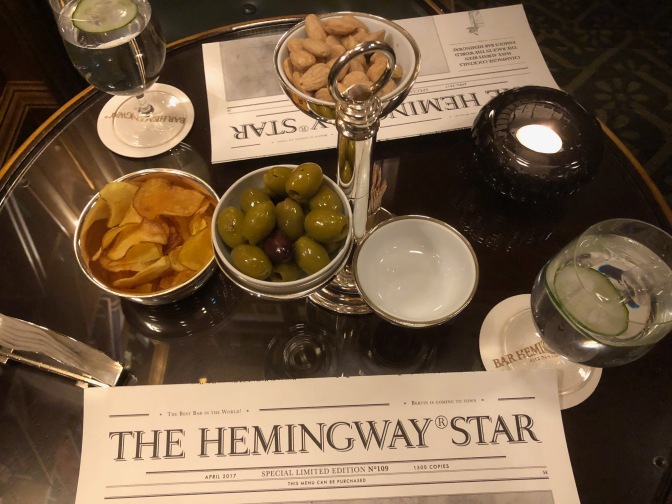 I believe Bar Hemingway’s current popularity continues to be about ambience and lore and cocktails, with the added garnish of Colin Field’s 24 year history there. His amiable personality, professional bartending and management skills, and vast anecdotal knowledge of famous past patrons have kept it high on the list of iconic places to visit.

In 1994, Colin was hired to reopen the Hemingway Bar [before the name change and after the twelve-year closure]. In the beginning, as the sole employee, he did everything single-handedly. But, he added a twist–keeping the bar open until 4:00AM when all others closed at 2:00. During times when it was too busy to manage alone, he recruited regulars to help–answering the phone, greeting and seating customers, taking orders. In exchange, their drinks were free.

Opening night, August 25, 1994, happened to be the 50thAnniversary of the liberation of Paris in WWII. Jack Hemingway [son by Hadley, father of Margaux and Mariel] was invited and came for the party. It turned into a bash. People dressed in GI and MP costumes. A full line-up of army Jeeps was staged along the street outside. Chaos reigned inside. Hemingway would have loved it.

These days, there are five or six employees who serve a regular flow of clientele seven days a week from 6:00PM until 2:00AM. Colin continues to hold court behind the bar, chatting up customers and blending new drinks.

Shortly before our departure from Paris, I met friends at Bar Hemingway on a clear summer evening. They invited me for a final good-bye drink.

Conversation flowed as we reminisced about shared experiences and future plans. We mused about hiking together in Portugal and Spain on the Santiago de Compostela trail a couple years before. And then, it was time to part ways. Walking back through the corridors of the Ritz, we stopped outside to say good-bye on Place Vendôme.

There is never any ending to Paris and the memory of each person differs from that of any other. We always returned to it no matter who we were or how it was changed or with what difficulties or what ease could be reached. It was always worth it and we received a return for whatever we brought to it. –E. Hemingway

Like Hemingway, Paris doesn’t end for me because I no longer live there. When I return, it will be with the happiness of years of wide-eyed discoveries, friendships for life, and the realization that…I will always be coming home.