It’s the middle of April. There are eighteen inches of snow outside our cabin in the Rocky Mountains. It’s stay-in-place quarantine time so there is nowhere to go anyway.

We watched a coyote run by in the early morning hours yesterday, on the hunt for something to fill his stomach, followed by four more.

Today, a family of deer bedded down among the pine trees on the southern hillside. What we actually saw was heads and ears, their bodies completely blanketed in white powder like a downy duvet.

The pine needles are so heavily laden that they create avalanches when they unburden themselves from the top, cascading down through lower branches in bulky snow burst plops.

All of this is pretty to look upon, but we must occasionally venture from the fireplace to don boots and hats and gloves and shovel out the drive, now a pileup growing foot by foot instead of inch by inch. Back inside, we shake off the snow and head to the kitchen. It’s time to refuel with something hot, hearty, and with ingredients almost always on hand.

Our quarantine comfort food go-to is an improved reboot of a childhood staple–grilled cheese sandwiches. But this is not some processed-cheese-slices-between-layers-of-white-bread kind of sandwich. I’m talking Grilled Cheese. With caramelized onions, bacon, and fresh spinach on hearty rye or sourdough bread.

Afterward, poke the fire, add some wood, lay down on sofa with a book or for a shelter-in-place power nap.

Why cast iron cookware rules in our home: care-about-cast-iron

A solid Dutch oven, a cast iron skillet, and an excellent knife with a fine blade–the good life. –Anonymous

Cast iron cookware is one of the things to have in your life–but only if you love it.

An iron skillet is a link to the past [one of the oldest cooking tools in any kitchen], relevant to the present and can be passed into the future. It connects you to the people who used it before–to the everydayness of their lives.

Cast iron is durable on top of the stove and inside the oven. It retains the flavor of foods cooked in it and is considered to be superior for cooking in general. Cast iron grabs heat and holds it. It is not Teflon, something you throw away when it becomes scratched and used. Cast iron will outlive you and begs to be passed on.

There aren’t many things in modern life that are passed down through generations and remain both beautiful and useful. –Ronni Lundy, historian of Appalachian food

Older cast iron is considered by purists to be superior. It is made with higher quality raw materials and the interior surfaces are smoother. A good vintage pan will be completely black in color and almost glassy in the texture of its’ interior surface. Seasoned right it becomes nonstick. Pitted surfaces on newer cast iron allow food to stick. It’s also more difficult to season.

Several summers ago, I met “Cast Iron Don” in an antique mall in Saugatuck, Michigan when my daughter and I were on a mom/daughter getaway. Don is a consummate collector of vintage cast iron, owning more than 100 pieces. He uses only two.

Don offered a wealth of cast iron history and information when he spotted my interest in a marked “Griswold, Erie, PA” skillet for the reasonable price of $17.00. He said it was the best-priced-name-brand-cast-iron-piece in the whole market.

Cast iron cookware was made in the U.S. from the 18th century to the first half of the 20th century. Griswold, Wagner, and Sidney were brand names casting pans in foundries, which also made farm tools and weapons. Each piece was poured and polished by hand which took hours of human labor, but produced a notable difference. They were lighter, thinner, with a smoother interior.

Today, some cast iron pans are being made this way but, with labor costs as they are, prices are in the hundreds of dollars for a contemporary artisanal skillet. For the fun of a treasure hunt you can find vintage cast iron in your relatives’ kitchens, garage sales, estate auctions or flea markets at a fraction of the cost of anything new. Many of them will already be seasoned.

Well-seasoned cast iron is the equivalent of a broken in pair of well-loved jeans. This is what makes it both beautiful and utilitarian.

Cast iron is porous. To make a nonstick cooking surface it needs oil for protection. Seasoned correctly, oil bonds with the iron pores. When exposed to heat, the polymer chains link and form a durable, slick coating surface.

Back in Michigan, Cast Iron Don has refined his own techniques for rehabbing antique ironware. I don’t recommend any of his rather dangerous methods. Vats of lye, boiling water, hoses, and protective wearing apparel require a lot more time and caution than most consumers need to muster.

Rusted or mistreated skillets can often be restored with a simple steel wool scrubbing before re-seasoning. Or, use coarse salt mixed with oil and rub mixture around with a paper towel. For a super tough buildup of dirt and grime, place pan in a self-cleaning oven for one cycle. Sediment flakes off and can be wiped away.

After cleaning, the important next step is to season iron correctly.

Cast iron needs to be cleaned in a specific way.

use plastic scraper if necessary

Use your cast iron often. For everything! Consider it an heirloom to be passed on and on and on from generation to generation. Embody it with your own family’s cooking lore. Someone else may get a taste of it down the road… 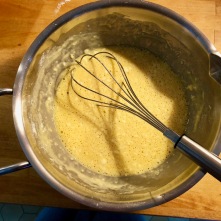 whisk ingredients by hand or in blender 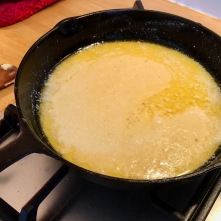